Editor's Note: The following was a script prepared for a court appearance to lay out the Plaintiff's assertions of defamation in a civil procedure.  The court has not ruled on this matter at this time so the following should still be considered allegations and opinion only until the verdict has been rendered.  The name of the former Red Cedar agent has been altered as she was not party to this suit.  If you are a previous client of Red Cedar Real Estate and would like to know how you can help us in our fight, please reach out to your Red Cedar agent for more details.

I own a small, local real estate company called Red Cedar Real Estate and I am here today representing the company as sole owner.  I want to start off by saying I do not personally know the defendants.  I have never met them and had no knowledge of their existence prior to February 6th, 2020.  That is to say, they have never done business or had any interaction with Red Cedar Real Estate prior to that date.

This litigation arose from the defendant posting libelous statements about my company across multiple online review platforms and for his slanderous statements made to 3rd parties who subsequently initiated a conspiratorial campaign to ruin my business.

On February 6th, 2020, a previous employee of the brokerage, Jane Doe, left a negative review of the defendant’s company, Eagle Air Duct Cleaning.  Her review indicated that she had hired the company to clean the ducts at her home.  Mrs. Doe hired the company solely as a home owner with no relation to Red Cedar Real Estate. 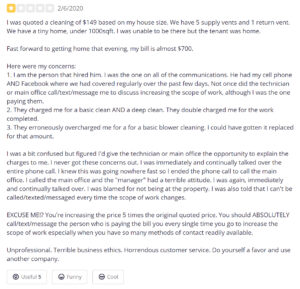 Her review, like many other online reviews of Eagle Air Duct Cleaning, indicated they lacked ethics and were guilty of bait and switch practices wherein they would quote a small price over the phone and then greatly increase the price once they arrive at the property.

In retaliation for this review, the defendant, Mr. Asayag, submitted libelous reviews of Red Cedar on both Yelp and Facebook.

His reviews were not based on any interaction with the company or services provided by Red Cedar Real Estate.  In fact, his Yelp review was wholly fabricated with a fictional business interaction where he describes a situation where he tried to set an appointment with Mrs. Doe that she never showed up for.  And yet somehow, despite not arriving for the appoint, she still showed and tried to sell him a “very, very dirty house.”  Along with this review the defendant included a picture of the HVAC unit of the supposed house he described in this review.  None of this ever happened and is a falsity. 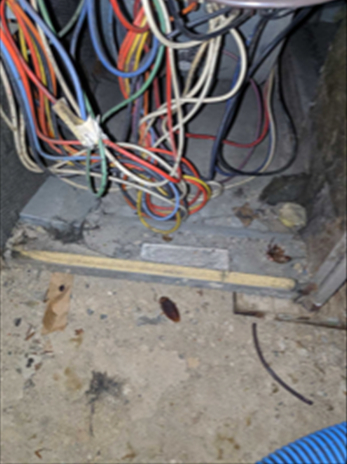 I would also like to introduce into evidence additional screen shots that are connected to both the Yelp and Facebook profiles associated with these reviews.  As you can plainly see, the Yelp profile has written reviews for other local vendors and indicates that the user, who goes by the defendant’s name, is the owner of an air duct cleaning company.  Likewise, the Facebook profile very clearly belongs to the defendants. 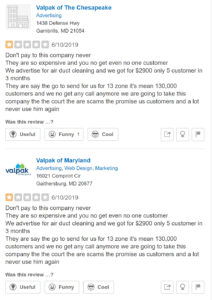 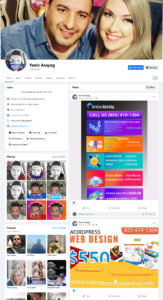 I was on vacation in Hawaii at the time and 6 hours behind the Eastern time zone so I didn’t know any of this was happening until I woke up the following morning, which was early afternoon the following day, February 7th.  Here is e-mail notification I received from Yelp of the review dated and you can see the notification was not sent from their system until the 7th.

As a small local brokerage as opposed to a national chain, over 90% of our business comes from online reviews and previous client referrals, so when I opened my email that morning to a deluge of notifications of negative reviews I was extremely alarmed.

I immediately reached out to Mrs. Doe to find out the root cause of the complaint.  Upon looking at the review, Mrs. Doe noted that the person leaving the review had to be from Eagle Air Duct Cleaning as the photo included in the review was of her HVAC unit and was the same exact picture the company sent her when he was working at the home.  This is a picture only Eagle Air Duct cleaning could have possession of.

Based on this picture, and the fact that the reviews were left from Mr. Asayag’s private Facebook and Yelp accounts, it cannot be disputed that Mr. Asayag himself left these reviews.  These reviews are knowingly false, meant to maliciously cause financial harm to the company and were broadcast to thousands upon thousands of potential clients of the brokerage.

Over the course of the last 11 years owning the company I have worked tirelessly for my clients and we, at the time, were the highest rated real estate company in central Maryland with nothing but 5 star reviews across all platforms.

Because we are a small company and real estate isn’t sold at the same volume as say, cheeseburgers, it takes a great deal longer to build up a substantial amount of online reviews from legitimate clients who we have worked with than for other types of businesses.  As such, we average about 6 reviews per year or just about one review every 2 months.

Over the course of the following 24 hours we received not only the defamatory reviews I’ve established were clearly left by Mr. Asayag, but an additional 14 1 star reviews on our Google business profile page for a total of 16. 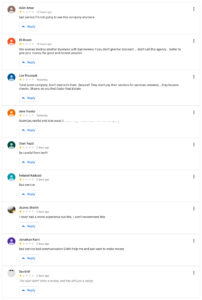 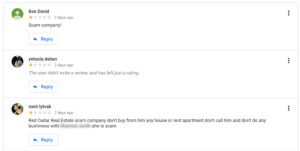 These reviews are entirely located outside of Maryland and DC which are the only locations we offer services, and the majority of them originated in the Middle East from users who had only ever written 1 or 2 reviews.  I mention this because this is text book click farming behavior where someone hires an offshore company to leave reviews about their company or a competitor’s company to illegitimately alter business standings.  I have proof that the defendants have used this type of service in the past to falsely boost their own company ratings.

Looking closer at these reviews, from people on the other side of the planet, we see that suspiciously these users are directly complaining that Mrs. Doe , by name, left a bad review for a company, that Mrs. Doe and Red Cedar are both “scams” and that they don’t pay vendors for services.  All of this language is in direct unison with the situation between Mr. Asayag and Mrs. Doe .  It is clear from this evidence that these people would have absolutely no knowledge of this specific situation had the defendant not slandered us to these users.

On February 7th, as I learned what was happening, I immediately reached out to Mr. Asayag through his Yelp profile.  I explained that I would immediately file a defamation lawsuit against him as soon as returned to Maryland in March.  Unfortunately just as we returned home Covid had become an issue and I was not able to visit the courthouse at that time. 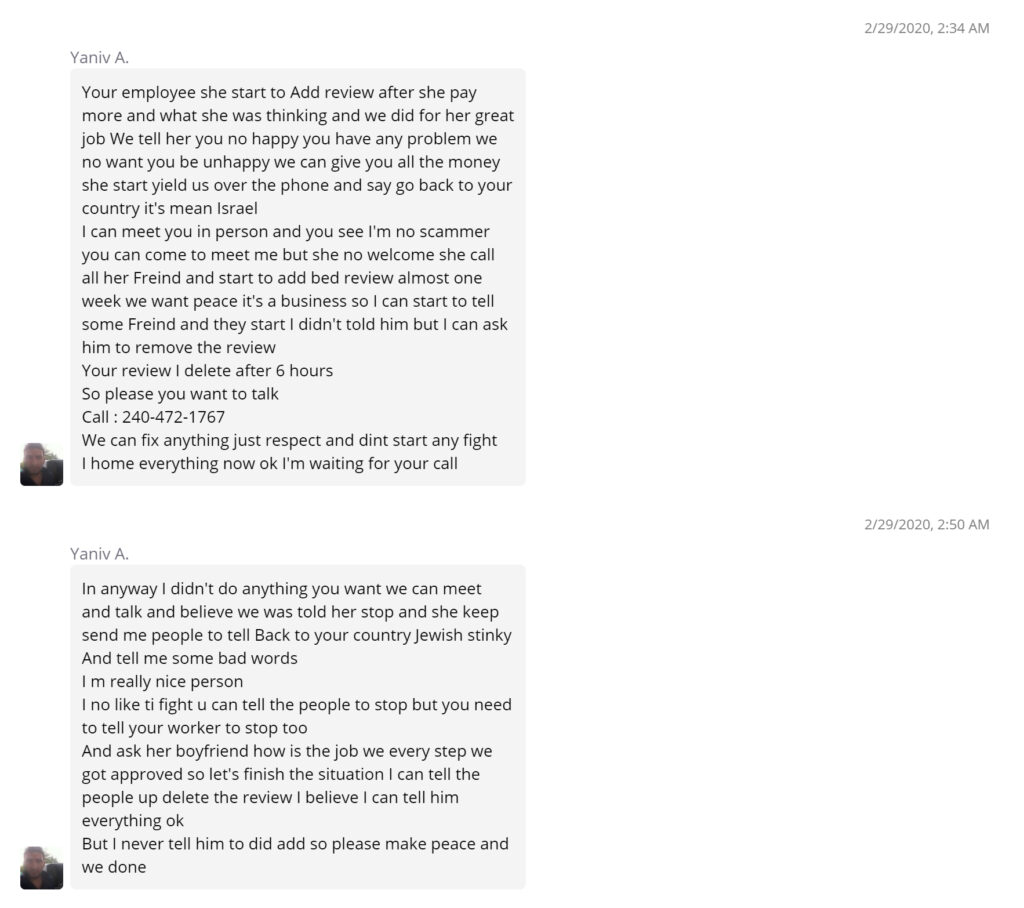 It’s important to note a few things about Mr. Asayag’s response to my message which he ignored for roughly 2 weeks.  In his response he explicitly states that he started to tell friends about the situation and he claims that, though he didn’t tell them specifically to leave the reviews, he would ask them to take them down.  This is a clear indication that whether or not Mr. Asayag requested these friends leave derogatory reviews, the information he provided to them that they subsequently acted on was slanderous.

I think it’s also important to point out while we are looking at this message, as it will relate to the credibility of the defendant and his defense, that Mr. Asayag has trouble with the truth.  In this message he indicates that he deleted the reviews after 6 hours.  This is a lie.

As you can see from these screen captures the Yelp review was not taken down by Mr. Asayag.  In fact, it was subsequently taken down by Yelp for violating their Terms of Service after an ongoing investigation.  The Facebook review was still active as of this morning.

What’s more, Mr. Asayag asserts in this message that Mrs. Doe called her friends and had them leave bad reviews for a week – but as you can see from these screen captures, there are no additional negative reviews at this time other than Mrs. Doe's own review.  I suspect Mr. Asayag made up that claim to try to make me feel sorry for him and not move forward with litigation.

In a follow up message a few minutes later Mr. Asayag indicates he can tell the people to stop leaving the negative reviews if I have Mrs. Doe remove her review as well.  This is a clear indication Mr. Asayag himself, and no one else, knows the origin of the negative review campaign and has the influence to have them removed.

Two weeks later I received another message from Mr. Asayag but this time his story had changed and he is now claiming that he did not know who was leaving those negative reviews and that his technician had been fired for the situation.  This seems disingenuous as he said in his messages originally that they did a great job for Mrs. Doe.  Typically business owners don’t fire their employees for doing a great job, so he was either lying about firing the employee or lying about him doing a great job.

In addition to the financial loss the company has suffered due to the defendant’s deliberately damaging actions, I personally have spent well over a hundred hours trying to resolve this situation.

I believe I’ve established the clear-cut case for defamation per Maryland law in that I have met the burden of proof for the 4 factors of defamation:

As an aside, I believe a strong case could also be made that the defendant is guilty of tortious interference with his Facebook comment as it was made directly to a third party who indicated they were a client of the brokerage and with the explicit instructions for them not to work with our company.

I am asking the court to award both compensatory and punitive damages in the small claims court maximum amount of $5,000 as well as court costs and pre-judgment statutory interest.  I am also asking the court find that the defendants engaged in libelous and slanderous activity so that I can submit the court’s decision to Google to have these libelous reviews removed.